The School of the Future - Part #1

"The city had no need of the sun, neither of the moon, to shine in it: for the glory of God did lighten it, and the Lamb is the light thereof."
- Revelation 21:23
Heaven is a school; its field of study, the universe; its teacher, the Infinite One. A branch of this school was established in Eden; and, the plan of redemption accomplished, education will again be taken up in the Eden school.

"Eye hath not seen, nor ear heard, neither have entered into the heart of man, the things which God hath prepared for them that love Him." 1 Corinthians 2:9. Only through His word can a knowledge of these things be gained; and even this affords but a partial revelation.

The prophet of Patmos thus describes the location of the school of the hereafter: "I saw a new heaven and a new earth: for the first heaven and the first earth were passed away. . . . And I John saw the Holy City, New Jerusalem, coming down from God out of heaven, prepared as a bride adorned for her husband." Revelation 21:1, 2.

"The city had no need of the sun, neither of the moon, to shine in it: for the glory of God did lighten it, and the Lamb is the light thereof." Revelation 21:23.

Between the school established in Eden at the beginning and the school of the hereafter there lies the whole compass of this world's history--the history of human transgression and suffering, of divine sacrifice, and of victory over death and sin. Not all the conditions of that first school of Eden will be found in the school of the future life. No tree of knowledge of good and evil will afford opportunity for temptation. No tempter is there, no possibility of wrong. Every character has withstood the testing of evil, and none are longer susceptible to its power. 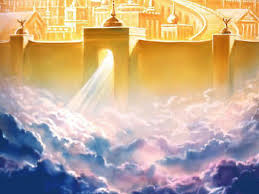