A new commandment I give unto you, That ye love one another; as I have loved you, that ye also love one another.
- John 13:34
In giving this lesson, Christ presented the principles of the law in a direct, forcible way, showing His hearers that they had neglected to carry out these principles. His words were so definite and pointed that the listeners could find no opportunity to cavil. The lawyer found in the lesson nothing that he could criticize. His prejudice in regard to Christ was removed. But he had not overcome his national dislike sufficiently to give credit to the Samaritan by name. When Christ asked, "Which now of these three, thinkest thou, was neighbour unto him that fell among the thieves?" he answered, "He that showed mercy on him."

"Then said Jesus unto him, Go, and do thou likewise." Show the same tender kindness to those in need. Thus you will give evidence that you keep the whole law.

John 4:9. And when the Jews were so filled with murderous hatred against Christ that they rose up in the temple to stone Him, they could find no better words by which to express their hatred than, "Say we not well that Thou art a Samaritan, and hast a devil?" John 8:48. Yet the priest and Levite neglected the very work the Lord had enjoined on them, leaving a hated and despised Samaritan to minister to one of their own countrymen.

The Samaritan had fulfilled the command, "Thou shalt love thy neighbour as thyself," thus showing that he was more righteous than those by whom he was denounced. Risking his own life, he had treated the wounded man as his brother. This Samaritan represents Christ. Our Saviour manifested for us a love that the love of man can never equal. When we were bruised and dying, He had pity upon us. He did not pass us by on the other side, and leave us, helpless and hopeless, to perish. He did not remain in His holy, happy home, where He was beloved by all the heavenly host. He beheld our sore need, He undertook our case, and identified His interests with those of humanity. He died to save His enemies. He prayed for His murderers. Pointing to His own example, He says to His followers, "These things I command you, that ye love one another"; "as I have loved you, that ye also love one another." John 15:17; 13:34. 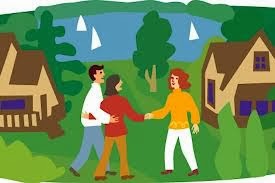