The School of the Future - Part #4

For we wrestle not against flesh and blood, but against principalities, against powers, against the rulers of the darkness of this world, against spiritual wickedness in high places.
- Ephesians 6:12
There will be open to the student, history of infinite scope and of wealth inexpressible. Here, from the vantage ground of God's word, the student is afforded a view of the vast field of history and may gain some knowledge of the principles that govern the course of human events. But his vision is still clouded, and his knowledge incomplete. Not until he stands in the light of eternity will he see all things clearly. Then will be opened before him the course of the great conflict that had its birth before time began, and that ends only when time shall cease. The history of the inception of sin; of fatal falsehood in its crooked working; of truth that, swerving not from its own straight lines, has met and conquered error--all will be made manifest. The veil that interposes between the visible and the invisible world will be drawn aside, and wonderful things will be revealed.

Not until the providences of God are seen in the light of eternity shall we understand what we owe to the care and interposition of His angels. Celestial beings have taken an active part in the affairs of men. They have appeared in garments that shone as the lightning; they have come as men, in the garb of wayfarers. They have accepted the hospitalities of human homes; they have acted as guides to benighted travelers. They have thwarted the spoiler's purpose and turned aside the stroke of the destroyer.

Though the rulers of this world know it not, yet often in their councils angels have been spokesmen. Human eyes have looked upon them. Human ears have listened to their appeals. In the council hall the court of justice, heavenly messengers have pleaded the cause of the persecuted and oppressed. They have defeated purposes and arrested evils that would have brought wrong and suffering to God's children. To the students in the heavenly school, all this will be unfolded. 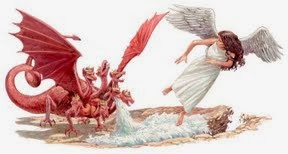